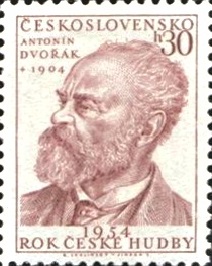 The “Largo” from New World Symphony, by name of Symphony No. 9 in E Minor, Op. 95: From the New World, orchestral work by Bohemian composer Antonín Dvořák, a major milestone in the validation of American — or “New World” — music and lore as source material for classical composition.

Written while Dvořák was living and working in New York City, the symphony purportedly incorporated the composer’s reflections on his American setting.
The piece premiered at Carnegie Hall on December 16, 1893.